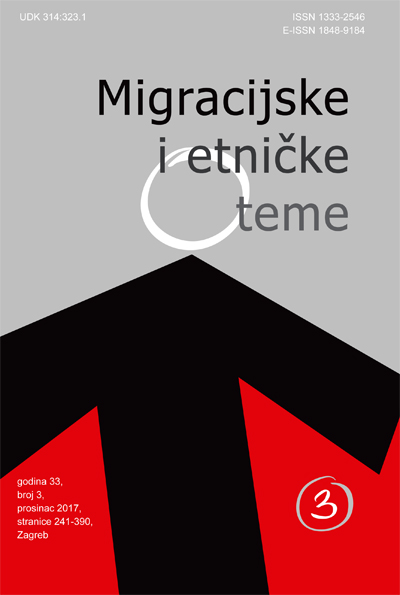 Summary/Abstract: This article presents the first study of the characteristics and motives behind recent immigration of Croats to the Federal Republic of Germany. The article shows that, based on the perception of the emigrants themselves, the main motives for emigration are not economic. The main objective of the research was to identify the motivation of Croats for emigration to Germany and to outline the reasons for emigration. The survey was conducted in the Federal Republic of Germany using mixed methodology. The data were collected using the survey and semi-structured interviews on a convenience sample of 1200 adult Croats who emigrated to Germany during the last four years. As a starting point, the official statistical data of Croatia and Germany were used in the analysis, serving as a descriptive and comparative framework of the study. The data were collected from February to November 2017. The data were collected through the network of Croatian teaching in Germany, the network of Croatian Catholic missions in Germany and the Facebook group “Idemo u svijet - Njemačka” (Let’s go Abroad – Germany). The analysis of immigrant attitudes has shown that the main incentive for emigration is the idea that the values of work ethic and honesty are not institutionalised in Croatia. The immigrants’ perception is that Croatian society is morally shattered. This research points to a very clear link between political ethics, weak institutions, and emigration. In addition to that, the existence of spread-out Croatian migrant networks in Germany from the past facilitates and encourages migration. It can be seen that the number of immigrants in Germany is higher than the number recorded by official statistics, and that main trends in emigration are the following: the emigration of young people between the age of 20 and 40 who were mostly employed, and the ones who have migrated with their entire families. The respondents reported high levels of satisfaction with their “new life” in Germany and have no regrets as to their emigration to Germany. Therefore, they rarely consider returning.The results of the study have shown that the push factors from the country of origin are stronger than the pull factors in Germany. Most people claim to have lost trust in their homeland as well as the belief that Croatian society will succeed in becoming a healthy society in short to medium term.There are also structural causes of emigration which are based on an inadequate model of centralised economy and inherited uneven distribution of population that originates from the former Socialist Federal Republic of Yugoslavia and the Croatian authorities’ past negligence to correct that model. For most respondents, the culprits for the current situation and mass emigration of young people from the country are incompetent politicians, the inefficient judicial system, and war profiteering. The immorality of political elites, legal insecurity, nepotism, and corruption are at the top of the list of the motives that have contributed to emigration.We have noticed that young Croats did not leave for money. Richness is not the key value for any of them. In fact, in Germany they are willing to give up more, become more tolerant, and endure more than in their homeland simply because they believe that this will be adequately rewarded in Germany, whereas they have lost all trust in their homeland.The study results also confirmed what the media speculated: today, highly educated, employed and married people are much more inclined to migrate, which was not the case in previous migrations. The dominant feature of this emigrant wave is the emigration of entire families, which was also a rare case in previous migrations to Germany. The greatest propensity for migration is found in people aged 25 – 40 – the most productive part of society. In a sample of 1200 respondents, they make up 58.33%. Most of the emigrants are employed and most of them have completed high school (60.7%), while the share of highly educated is 37.8%. The share of highly educated persons in the emigrant contingent for the past three years is thus 12% higher than in the homeland, within the age group of 25–40. As for the regional attribution of the respondents, the greatest tendency for migration is expressed by the respondents from Zagreb and the surrounding area, as well as from Slavonia and Baranja (60% of all migrants are from these regions).The set of questions that checks emotional attitudes shows that the majority feel “generally better” than in their homeland, that nostalgia is not a prevailing emotion (as is often the case of Croatian discourse on migrants), and that the vast majority feel that in Germany they are getting more, in subjective and objective sense of the notion, than they are losing in the homeland. The research also disproves the thesis that Croatian emigrants work harder in Germany than in their homeland, as well as the widespread prejudice that Croatian migrants in Germany feel alienated and have a strong self-awareness of the fact that they are foreign.Even though it was certainly not possible to examine the entire spectrum of motives and incentives for emigration, the ground has been set for further research of this important subject.