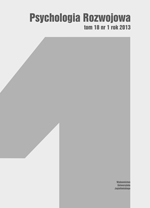 Summary/Abstract: The main aim of the research was to empirically verify the model of relationships between the three identity dimensions: commitment, in-depth exploration and reconsideration of commitment, as differentiated in the model proposed by Crocetti, Rubini, and Meeus (2008), and the eudaimonic psychological well-being in the model proposed by Ryff (1989). The participants were 504 students and workers aged 17–55. Two separate models were created: one considered identity formation in educational domain, and the other – in occupational domain. Well-being was introduced to the model as an endogenous variable, explained by the three identity dimensions. In the model with educational identity, the identity dimensions explained 28% of well-being variance, and in the model with occupational identity – 17%. The results obtained highlighted the meaning of identity formation on the way to achieve eudaimonic well-being.