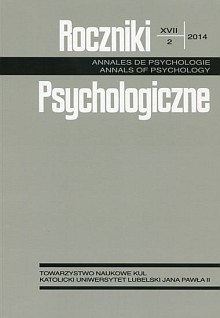 Summary/Abstract: The article is an introduction to the volume devoted to personality traits and their measurement. It consists of two parts. The first part presents two research traditions that use the taxonomy of five personality traits: the lexical tradition (using the term “Big Five”) and the psychometric tradition (using the term “Five-Factor Model of Personality”). Similarities and differences between these traditions are outlined and the basic elements of other models that have appeared in recent studies – such as the Big Six or the Big Two – are introduced in it. The second part of the paper presents selected issues of measurement, discussed in detail in several texts included in the current issue of Annals of Psychology. Special attention is drawn to differences between various questionnaires in the operationalization of the five traits as well as to the growing popularity of short scales for measuring personality traits. The paper also outlines problems involved in the measurement of personality traits and the psychometric instruments used.