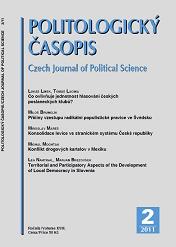 Summary/Abstract: Parliamentary systems of government are founded on the principle of members of a legislative party acting in toeing the party line. The aim of this article is to identify the factors influencing the level of unity of parliamentary party groups in the Czech Chamber of Deputies. As the research is a one-country study, the theoretical explanations used are party specific. Hypotheses refer to government status, party size, party system fragmentation, differences in parties’ ideological platforms, and political socialization and incumbency. This study is based on roll-call data for the 1993 to 2008 period, aggregated to legislative terms. Using an OLS regression modelling approach, this article finds support for the hypothesis that a party’s status in government influences the observed legislative party unity. However, legislative party unity declines when the size of a government’s majority increases and the chances of losing a roll-call vote decline. Moreover, there is weaker evidence regarding the influence of party size on party unity. In short, legislative party politics in the Czech Chamber of Deputies is strongly determined by government and opposition competitiveness.