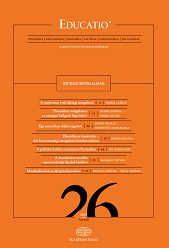 Summary/Abstract: Mihály Csákó, in an investigation among university students, has defined the ‘conflict management’ as a learning process. Studying conflict situations he has invited thirteen-year olds to suggest solutions (the investigation has been based on French and Swiss re- searches). In his investigation Csako could differentiate two groups of teenagers. The majority group can be characterised by growing independence and with it, growing attitudes of aggression. The minority group of the teenagers, however, are still dependent on the adult community around them. In two time sequences (1998, 2002) the majority group became bigger while the minority group became smaller (in other word, the aggressive group became more dominant).