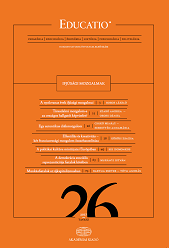 Summary/Abstract: This article describes the birth, operation and social background of the Independent Student Parliament (ISP). The Hungarian legislation gave way to secondary school students’ to organize themselves and defend their interests in the form of students’ governments in schools as early as 1993. At the time neither students nor schools were prepared properly for such activity. A National Students Parliament has been set up in 1998 by law. Its disfunctioning provoked students to set up their Independent Student Parliament in 2014 spontaneously. ISP is independent of the state, of political organizations and of the schools as well. It is elected yearly through general election via internet by students of 15 to 21 year of age, nationwide. The Fall plenary session (3 days) selects subjects to elaborate in working commissions from the deputies’ proposals. Working commissions have 4 months for discussion and formulation of their proposal which should be voted by the Spring plenary session to become an ISP decision. The package of decisions is put on the table of the Minister of Education. Socio-cultural stratification of Hungary has an impact on the composition of the ISP: students present themselves more frequently from institutions with higher prestige than apprentices and students in less developed regions. However, the Independent Student Parliament is still a genuine grassroot movement, reflecting real problems of the secondary education.