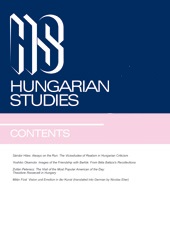 Summary/Abstract: This paper attempts to explore the identity politics component of two völkisch novels from the 1920s that grapple with the question of the identity of Germans from the old Austrian empire. The two authors, Bruno Brehm and Emil Lucka, were popular prose writers of the interwar period who partook of the general questioning, criticism and rethinking of the 19th century ideologies that occurred after the Great War. Their work – from the vantage point of the history of ideologies – may be interpreted as embedded in the language game of the German conservative revolution, especially in the currents that emphasized the permanent and essential characteristics associated with belonging to an ethnic group and the ethical consequences for individuals of this belonging. For this reason, this paper first briefly introduces post-1918 German völkisch ideology and proceeds to interpret the identity politics of the novels by making use of the key concepts of this strand of “young conservative” [jungkonservativ] thought. The key concept for interpreting the ambiguous experience of “being Austrian”, i.e., belonging to the greater community of Germans, yet having had to suffer through centuries of living in a separate state became that of the borderland [Grenzland], a complex notion that dialectically united the experiences of heroically struggling to “remain German,” while being threatened with loss of ethnic character through exposure to cosmopolitanism or assimilation. By showing how the discourse of Grenzland structures the narratives, the paper seeks to provide a reminder that the discourses of identity in early 20th century Austria were more complex than is often remembered: alongside late modernity, as represented and reflected by authors like Robert Musil and Elias Canetti, a different, more popular and more political trend also existed, which narrated the break-up of the Dual Monarchy and its aftermath in the context of the threatened existence of the Germans of the borderland.