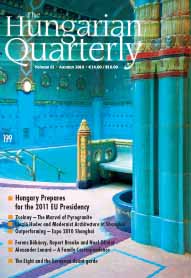 Summary/Abstract: In January 2011 Hungary will assume the Presidency of the Council of the European Union. Its six-month term will be an interesting period for Hungary and the EU alike. Hungary will coordinate the Council’s vast bureaucratic and decision-making apparatus while not being able to rely on any significant wealth of accumulated knowledge about some of its workings due to the novelty of the Lisbon institutional framework currently being implemented. The EU itself faces a series of intractable but essential policy decisions about the new financial perspectives for 2014–2020 and the “2020” goals, promoting the bloc’s competitiveness, sustainable growth and social cohesion. It must deal with the periodically re-emerging challenge of financing agricultural policy while also setting the pace in external relations in areas as diverse as the Eastern Partnership for post-Soviet states and the thorny integration process of the Western Balkans. Accordingly, Budapest and Brussels share an interest in a successful presidency. Success won’t be measured in breakthroughs or permanent solutions but in terms of progress made in various knotty areas. As a result of the complex and lengthy policymaking processes currently underway, the Hungarian presidency will be mostly concerned with “rolling policies” (inherited issues) and providing follow-up to the mainly Spanish initiatives, since the current Belgian presidency has limited capability and political will to add to the already crowded agenda.