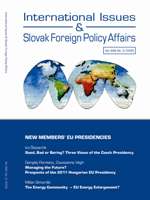 Summary/Abstract: The paper aims to provide an assessment of the ongoing Hungarian preparation effort for the 2011 presidency of the Council of the European Union. It is divided into three main sections and in each of them the authors seek to make a key statement. First, the authors argue that the current structure of presidency trios is still very much in the making. Second, they use a survey of the tentative and unofficial team presidency program, assembled chiefly by experts cooperating with the three governments, in order to assess Hungarian ambitions and options during the presidency. Thirdly, they measure the potential of three factors – bureaucratic capability, shifts in trio member preferences and domestic context – to derail the Hungarian presidency. A considerable part of the paper is based on the ongoing research at the Hungarian Institute of International Affairs, which aims to assess presidency preparation efforts. The research includes a series of interviews with experts, public servants and politicians, which are currently underway, while already available materials were used as source materials for the paper.