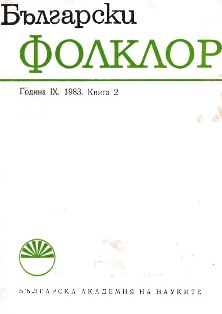 Summary/Abstract: Aspects of the feminine, regardless of whether they take anthropomorphic, theriomorphic, hybrid zooanthropomorphic or object-linked form, have not yet been investigated in conjunction with Bulgarian folk tales, whereas in Western folktale research the feminine, resp. the other-image, has been the subject of many analyses (at least from the psychological viewpoint of the Jungian school); such is also the case in cultural historical research. Using the Bulgarian fairy tales as an example, an attempt is made to illuminate previously neglected points of view: 1. With the help of the structural method, as it has been modified by Propp, Greimas, Dundes et al. for the narrative mode, the author elaborates the specific role of feminine agents/actors and objects and discusses the possibility of deriving structural and functional models. 2. Further on, an attempt is made to conceptualize the fairy tale, on the basis or an anthropologic-socio-historical approach, as a superstructure in relationship to historical social events, i.e., arrange them within a system of relationships of social and symbolic interaction. 3. Finally, the fact of relevant feminine presence in Bulgarian fairy tales is interpreted in the formation of hypotheses as a possible function of a matriarchal social organization, resp. of its reflexes in myth.