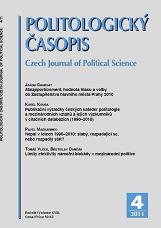 Malapportionment, hodnota hlasu a volby do Zastupitelstva hlavního města Prahy 2010
Malapportionment, the Value of a Vote and the Election of the Municipal Council of the Capital City of Prague, 2010

Summary/Abstract: Comparative studies of electoral institutions have marginalized or ignored a fundamental characteristic of electoral systems called malapportionment. This paper presents a brief introduction to the issue of malapportionment from the theoretical (and comparative) perspective suggested earlier by Samuels and Snyder and then applies it – along with the issue of the value of a vote – to the Municipal Council of the Capital City of Prague electoral system, especially in the context of the October 2010 elections and previous changes to the electoral system. The analysis of malapportionment and the value of a vote shows that the new electoral rules present some problems with respect to the “one vote, one value” principle but, on the other hand, that these rules conform with, and are comparable to electoral systems used worldwide. This conclusion supports the Czech Constitutional Court’s decision not to annul the 2010 Municipal Council elections.