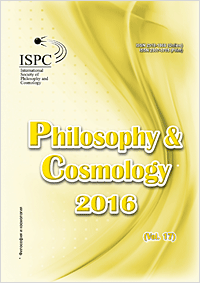 Summary/Abstract: In the paper, the author comprehends ontology of the war and peace. Using the results of empirical and theoretical research in the field of geophilosophy, as well as neuroscience, psychology, social philosophy and military history, the author comprehends the philosophy of war and peace. The author proves that the problem of war and peace originates in the features of forming mentality. War and peace are the ways to achieve a regulatory compromise between manifestations of the active principle, which was initially laid in the foundation of the human mentality, and the influence of the external environment through natural selection; between the complicating needs of mental space as a totality of mentalities at the scale of the Earth and the possibilities of satisfying them; between the proclaimed idea that unites mental space, and the possibility of its implementation. War and Peace regulate high-quality structure and manifestations of mental space: reduce the number of mentalities, whose structures predispose to aggression, and increase the number of mentalities, whose manifestations are directed at integration and cooperation. Through the proposed theory of war and peace, I have come to realize that, the state of peace for the evolving mental space includes the philosophy of war; the transition from peace to war depends mainly on the effectiveness of educational technology.