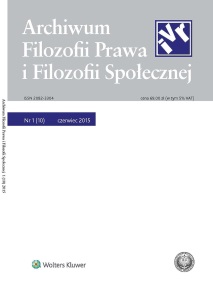 Summary/Abstract: Ronald Dworkin once criticized legal positivists for that their theories are founded on a mistake called “the semantic sting”, which claims that legal philosophy, as a silent prologue to every decision of law, cannot be only a semantic account to the word ‘law’. The article presents Dworkinean argument (and its most influential critique of Herbert Hart) and examines whether Jerzy Wróblewski’s legal theory (in its descriptive layer similar to the theory of Herbert Hart) is susceptible to “the semantic sting”. Finally, the answer given is based on a particular solution: Jerzy Wróblewski’s concept of rationality of legal decision appliance. The answer is in accoradance with argumentation of soft positivists, such as Herbert Hart or Jules Coleman, and is based on the acceptance that, even if Dworkin’s argument is meaningfull, it still does not apply to the theories presented by the soft positivists. The controversy whether a particular theory is “semantically stung” is de facto a dispute over a proper methodological approach to legal theory and a relation in which such a theory remains to interpretative jurisprudence of Ronald Dworkin. In this case we can treat Jerzy Wróblewski’s theory as a metatheory, which deals with theoretic disagreement over the grounds of the law, while deciding the case.