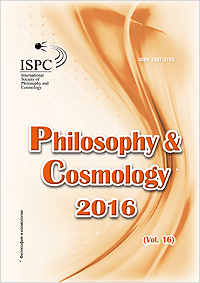 Философия космоса: место человека в масштабах Земли и космоса. Глава первая
The Philosophy of Cosmos: the Place of Human at the Scale of Earth and Cosmos. Chapter One

Summary/Abstract: In the first chapter of the monograph, the subject of the author’s research is Dasein. On the one hand, reminiscence of Heidegger’s ideas allowed the author to use a reputable research of famous philosopher of the twentieth century, as well as a large cohort of researchers’ his work and followers, on the other hand, avoided direct reference to Heidegger’s texts and his theorists. The author investigated the research question as “What is Dasein in the philosophy of the cosmos?” which is not based on Heidegger’s ideas but only on the appeal to them. The author suggested that the philosophy of the cosmos as he created a methodological structure for the penetration and opening of Dasein to its maximum extent. The author used the dialectical, system-structural, structural-functional method, as well as methods of comparison, analysis and synthesis. The author’s main contribution to the research of the topic was a response to the following questions: 1. “What is philosophy?”, namely, philosophy is: a) a certain kind of action which causes historical events (Marx’s understanding of philosophy)? or b) questioning i.e. asking questions about Dasein and being and the search for answers to them (Heidegger’s understanding of philosophy)? 2. “What methodological apparatus should be involved for the disclosure of the manifold meanings of Dasein?” 3. “What is Dasein?”.