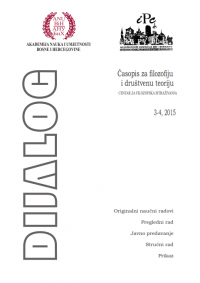 Da li je moguća etika u potrošnji?
Is the Ethics in Consumption Possible?

Summary/Abstract: The article considers the most important aspects of consumption as the area of business ethics which, in turn, deals with responsible and conscientious approach in consumption. Its appearance can be traced in the XVIII century and American war of Independence when Americans refused to buy British products and when, through the act of consumption, resistance towards the British economy and efforts to help own was shown. This refusal to buy foreign products as the act of political resistance represented a form of introducing morality in the consumption. Ethical consumption emerges as the reaction to what Veblen calls “conspicuous consumption” and its superficiality in consumption practice. Contrary to conspicuous, ethical into the act of consumption includes a conscientious and responsible approach. Consumption practice is examined through the concept of identity, which is defined through certain contents we consume: fashion, food, values, ideas. This article strives to demonstrate the morality as a necessary element of consumption practice, which indicates that this practice is not only a bare satisfaction of needs, but a complex social activity which includes responsibility and conscientious approach to this practice.