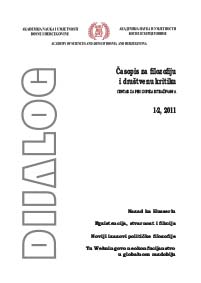 Summary/Abstract: This article is an attempt to present historical development of the concept of the political. Through positions of Carl Schmitt, Chantal Mouffe and Ernesto Laclau, Jean-Luc Nancy and Philippe Lacoue-Labarthe, this article demonstrates three different understandings of the relations between politics and the political. While Carl Schmitt understands the political as the precondition of a state and defines it through the antagonistic relation friend/enemy, Mouffe and Laclau determine the political as agonistic, transforming at the same time the enmity into the relations between adversaries. Instead of Schmitt’s idea of enmity, as well as Habermas’s deliberative definition of democracy, the two theoreticians suggest a concept of agonistic pluralism should be introduced which would, along with the agreement, necessarily include disagreement on political matters. Nancy and Lacoue-Labarthe, similarly to Mouffe and Laclau, and following Heidegger, bring the political into relation with philosophical and define it as a constant questioning of current politics. They believe that every agreement necessarily leads to totalitarianism so that the political thus always needs to be opposed to power and government.