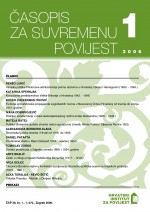 Policija i žandarmerija u doba šestosiječanjskog režima kralja Aleksandra (1929.-1935.)
Police and Gendarmes during the Personal Dicatorship of Yugoslav King Alexander, 1929-1935

Summary/Abstract: Control over citizens and political opponents of the regime, government's pressure measures during the elections, violence of gendarmes, torture during prison interrogation, inhuman relation toward prisoners, dismissal and transfer of state employees (most notably judges and teachers) were certainly not the invention of the personal dictatorship of King Alexander introduced in the Yugoslav state on January 6, 1929. In accordance with the new political course of the dictatorship any kind of oppositional political activity was immediately qualified as unlawful and directed against the state. Such views of the ruling regime led to an increase of citizens who were for various reasons labeled as enemies of the regime and this automatically meant that they were considered the enemies of the state. Although a large number of Yugoslav citizens came under regime's surveillance the methods of control over the population remained primitive and unsophisticated. General underdevelopment and economic poverty of the state were key elements that limited the possibility for the organization of an efficient police apparatus. Therefore policemen and gendarmes continued using equally violent methods that were already well known from the parliamentary period of the Yugoslav state. Such examples of violence were the result of low level of education and culture of gendarmes, patriarchal values and lack of tradition. It was also the result of the inability to understand that a state needs organized and efficient administration and modern and sufficiently trained gendarmes and policemen whose only goal should be to serve the state and defend its interests and not to use force to uphold a particular regime. Sometimes individual policemen and gendarmes took individual unlawful actions, but such actions were quickly misperceived as an action of the regime and of the state. It must be taken into consideration that Kingdom of Yugoslavia between 1929 and 1935 found itself under various terrorist attacks and victims of these attacks were both civilians and representatives of the state authorities. Therefore it can be concluded that police and gendarmes sometimes acted inappropriately and not according to the law because they only reacted to various terrorist attacks and violence directed at the ruling regime and its representatives.