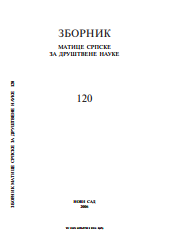 Summary/Abstract: The (post)modern economy finds itself undoubtedly in the center of a large scale, deeply contradictory and uncertain current transformation of the world. Together with the (post)modern technologies, it composes the dominant core of the globalizing processes, often referred to as globalization. The key features and especially the accumulated consequences of these processes pose a challenge for scientific and theoretical thought in the form of essential questions and dilemmas which are in the last instance tied to the impact of globalization on the quality and meaning of human life. This problem relates as much to individuals as it does to different social groups and human communities, that is to the entire humanity as such. This paper attempts to problematise these contradictory relationships between global, corporative economy as an instrumental value and the human liberty as a substantive that is the highest value in itself (summum bonum), which gives meaning and dignity to human life. Therefore, if economy in one form or another covers most of human practical activity, then it is certain that it can have a decisive impact on the most fundamental value of human life, that is the value of freedom (individual, general; internal and external). Of course, the spectrum of economy can act either way — as an encouragement or, as often happens, as a deterrent to expansion of human freedom. This paper aims to briefly indicate some causes, characteristics and consequences of global economic processes which, as it seems paradoxically, contribute more to narrowing than to widening room for human liberty, or they simply generate proliferation of „hedonism of non-freedom". Is this another case of „surplus of knowledge" and „deficit of wisdom" that so strongly characterizes our time or something else?