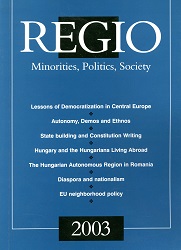 Summary/Abstract: The modern democratic state should be the proper starting point for all analyses of minority regulation and the nature of autonomy. The purpose of minority regulation is to ensure that the members of a minority enjoy the same civic rights as members of the majority; above all that they are secure in their cultural reproduction on terms that are equal to those of majority and, at the same time, that they have equal access to the material and symbolic goods of the state. The core of the problem is that observing minority rights on these terms necessarily means that the minority will demand certain cultural goods that the majority will regard as undesirable or offensive or deviant or excessive, but under the norms of self-limitation it must accede to those demands, meaning that majority-minority relations become a matter of both democratic theory and of state design. While minority demands cannot go beyond the limits of citizenship, those limits must be designed with inputs from both majority and minority. In other words the very definition of citizenship must be reached in such away as to satisfy the minority as well as the majority. That is a minimum requirement of democratic consent. However, very few majorities see it that way and consciously and even more unconsciously they will impose their own majority perspectives and declare them to be those of citizenship.