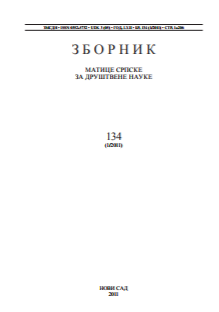 Summary/Abstract: This paper, represents a hypothetical consideration of the phenomenology of the Serbian national idea, within the traumatic circumstances of the breakup of the Yugoslav state at the end of the 20th century, when the Serbian national issue was reopened in an exceptionally unfavorable geopolitical context for the Serbian people. The author specifically analyzes the ideological and political factors behind the Serbian confusion withki the theoretical framework of Agnes Heller’s critical interpretation of history, which speaks of the ”confusion of historical consciousness” that began with World War I and was magnified by the Holocaust, Hiroshima, the Gulag and the European concentration camps. The author of this article adds the great powers’ Balkan interventions during the world wars to their dishonorable historical legacy, ending with their role in the creation and the breakup of Yugoslavia, at the expense of the Serbian people. The conclusion contains an appeal for a more rational national self-consciousness, founded in positive Serbian tradition and real insights into the social conditions that determine the processes in today’s Serbian society and its environment.