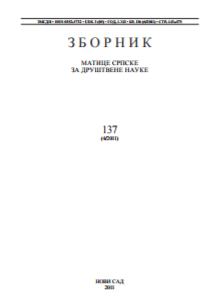 Summary/Abstract: Technology studies have always been the most important focus of archaeology, as a science which analyzes human past through the study of material culture. To say that something is technological in archaeology, means to put the concept of technology in the centre of theoretical studies, and to study not only the form of the object, but also the entire sequence of technological factors, from raw material choice, mode of use, up to the reasons for abandonment. The concept of technology in anthropology and archaeology is based on the original meaning of the word τεχνη in ancient Greek, meaning the skill, i. e., to study how something is being done. Such a concept of technology as a skill or mode of doing something was for the first time outlined by the French anthropologist Marcel Mauss, whose starting point was that every technological statement was at the same time social or cultural statement and that technological choices have social foundations. Pierre Lemonnier further developed the anthropology of technology, focusing on the question of technological choices, as well as numerous other anthropologists. In archaeology, the most important contribution to the study of technology was the work of André Leroi-Gourhan, who created the concept of chaîne opératoire, as an analytical tool for studying the mode of creating, using and discarding an artefact, starting with raw material acquisition, mode of manufacture, final form, use (including caching, breaking and repairing) up to the final discarding. It is not only about reconstructing the algorithmic sequence of operations in creating one object, but it is a complex analysis of operational chain within one society which includes the analysis of technological choices. The analyses of technologies today include a variety of different approaches, most of them with emphasis on the cultural and social aspects of technology. The analysis of bone industry in the Early and Middle Neolithic in central Balkans (Starčevo culture), which included not only final objects, but also manufacture debris and semi-finished products, revealed a well developed industry, with a high level of technological knowledge on the properties of raw materials, skillful manufacture, well organized production, as well as possibility of a certain degree of specialization on the micro and macro level (within one settlement and within a group of settlements). Both raw material choices and manufacturing techniques, as well as the final forms, demonstrated a high standardization level. Also certain symbolic value was attributed to some raw materials, and there is a possibility that skill itself was valued. Further analyses of multiple technologies will help in reconstructing the organization of production, social and economic aspects in Neolithic societies, as well as the role of technology in everyday and ritual life.