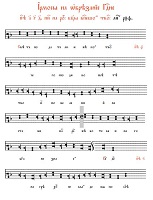 Summary/Abstract: Handwritten musical manuscripts have played signiﬁcant role in the religious culture of the former Eparchy in Mukačevo. For various reasons, they have been the only source of long lasting tradition of liturgical chant in the Byzantine churches. The present manuscript represents its hitherto most ancient known variant; hence, it is very important to preserve data contained in it. Its date of origin has been estimated to a range of 1634 to 1650. The original [i.e. manuscript] is be-ing preserved in the Transcarpathian Ethnographical Museum in Užhorod (Ukraine) and this diplomatic edition has been prepared using its digital copy, which is being stored in the Jan Stanislav Institute of Slavistics of the Slovak Academy of Sciences in Bratislava.