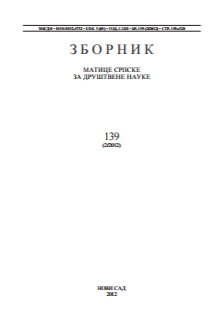 Summary/Abstract: This work is dealing with the use of Serbian and Slovenian idiom by the members of Serbian ethnic community who settled in Ljubljana after 1991, that is, after Slovenia became independent. It was an immigration wave which took place in the period after the forming of new states on the territory of the former SFRY. In this sense, it is being viewed as a new immigration wave. The question of range and intensity in which the Serbian language is used on one hand, and the use of the Slovenian idiom on the other, is analyzed in this work in the context of a process of involvement of the immigrants in a majority community. Thereby, the starting point is the assumption that a language as a basic means of communication has a certain influence on the involvement of the immigrants in the majority community. The data I have found so far lead to the conclusion that the language competence in Slovenian most commonly has a vast influence on the involvement of the immigrants in the majority community, but also, despite all this, it is not in itself always sufficient and necessary.