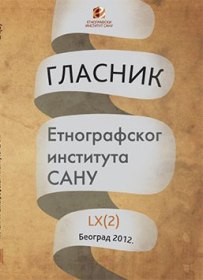 Summary/Abstract: This paper analyses an application of Serbian language idiom within communication in private and public spheres, among members of the Serbian ethnic community in Ljubljana. Based on the idiom’s dissemination and the intensity of its usage, the paper draws conclusions about communicational function of language as well as about perseverance of native tongue as a segment of ethnic identity. Research results imply that the immigrants in question are asymmetrically bilingual, meaning that Serbian idiom is used in all spheres of communication. On the other hand, Slovenian language represents a language used in public communication while Serbian idiom is used within private spheres of communication. Therefore, a conclusion could be drawn that the level of perseverance of native tongue depends of dissemination and intensity of its usage within private sphere of communication. However, usage of Serbian idiom is not in direct correlation with a need to preserve one’s mother tongue and ethnic identity, but it is correlated with its communicative function.