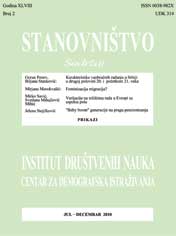 Summary/Abstract: Sudden increase in the number of live births after the Second World War due to an increase in fertility rates has led to the formation of cohorts with specific characteristics or baby boom generation. This generation is unique in the history of the demographic phenomenon that has affected and affects the functioning of many segments of society. The aim of this paper is to assess structure of baby boomers who are few years away from retirement, using demographic data. Impact of baby boomer age structure of current and future retirees is described with a graphical display of current and projected age pyramid of baby boomers. Demographic pattern that women live longer than men is evident in the projected pyramid. In addition, the number of baby boomers will lead to a "younger" old population. The imbalance in the number of men and women pensioners, as well as older cohorts of women and female baby boomers was analysed. As a result, an increasing trend of women's age pensioners who are members of the baby boom generation was clearly observed, which is opposite to the older cohort of women who often were family pensioners. Different circumstances and conditions in which female boomers lived and worked will form a new "pension model" because they will gain their benefits as well as men, for the first time in significant number, unlike their mothers, which gained the right to retire after they become widows. Number of women age pensioners is getting greater compering to men, as the result of changes in the economic activities of women in the last half of the 20th century. When baby boomers retire and exit the working population, this will create a vacuum, because the numerically smaller generations will enter working population, while the sudden and very shortly, the number of population older than 60 or 65 will increase, most of them will likely to acquire the right to a pension. It is undeniable that baby boomers had impact on demographic structure, but also on society as a whole. They have been extremely important factor of development of our country during their working career, they are healthier then previous generation and many of them possess the knowledge and experience gained by the years, so rigid prediction of future changes that will produce the retirement of this generation has no excuses. Retired baby boom generation will perhaps lead to new, better way of life in old age.