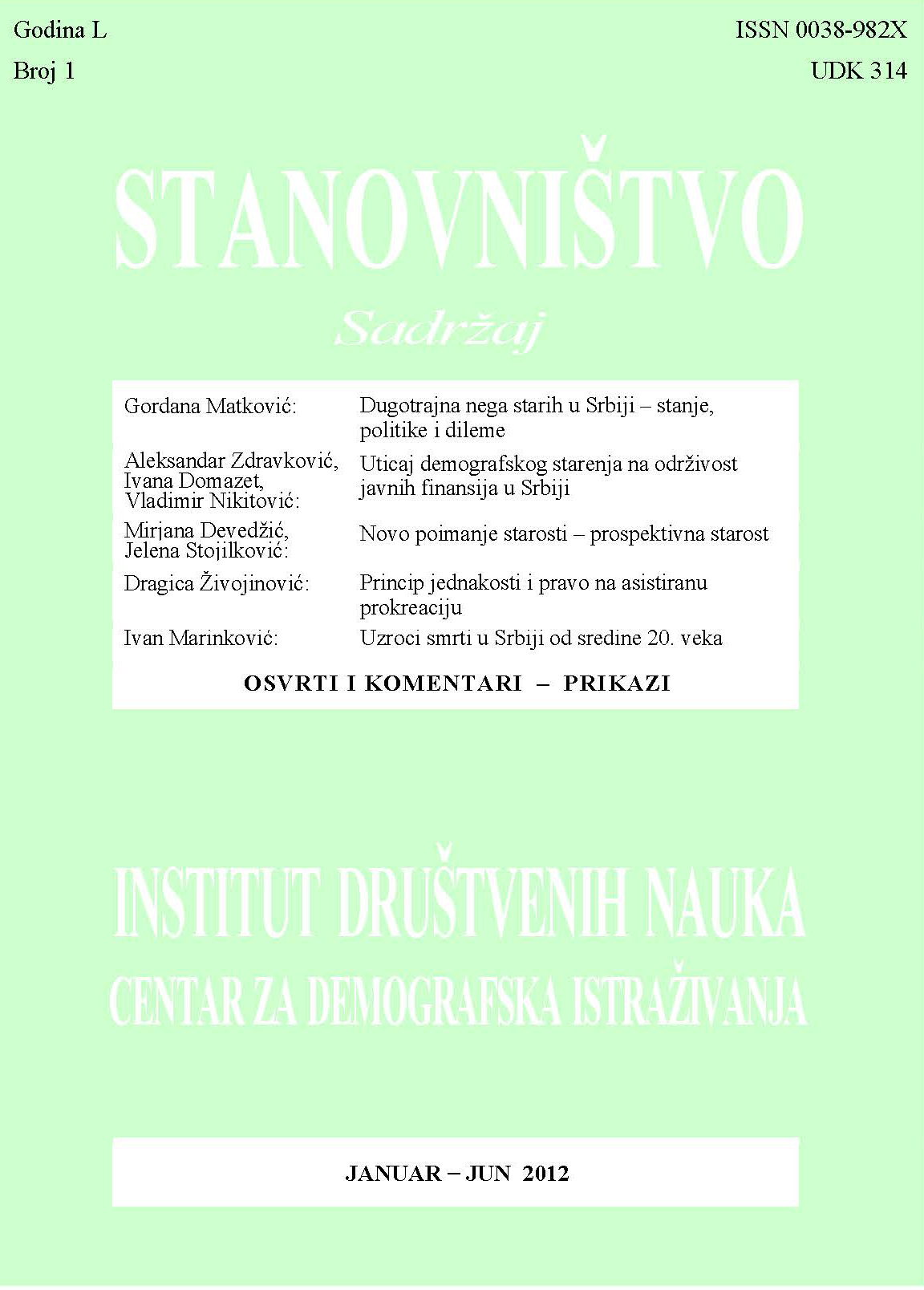 Summary/Abstract: While the last century was the century of world population growth, according to demographers, the XXI century will be century of population aging. Statistics undoubtedly show that number of elderly will continue it’s growth in the future. If old age is seen as period of life with reduced physical and mental capabilities and increased disability, and demographic aging as increase of dependent population, trends are quite disturbing, at least in certain societal segments. In developed countries, this population category is no longer treated as passive or as a "burden of society" and efforts are made for better social inclusion of older people. In contrast to growing interest in this phenomenon, the concepts that define the aging of the population remained stagnant. The aim of this paper is to introduce into domestic literature the term "prospective age" as a dynamic category which is more affected with socio-historical conditions, not only with biological as traditional definition of aging suggested. Papers written by Sanderson and Scherbov offer new methodological options for study of population aging, because it takes into account the biometric rather than chronological approach. Calculation of prospective years is a simple operation that requires pair of the same number of remained life expectancy from life tables for two different periods (the year of concern is index, and the one we are comparing with is standard year), so that phrase "40s is the new 30s" or "70s the new 60s" gets scientific foundation. Average remaining years of life represent a realistic indicator suggesting increased capacity, activity and vitality of individuals, which is due to accepted demographic parameters still considered old. „Prospective threshold“ is defined as the age when life expectancy falls below 15 years (it is subjective choice made by Sanderson and Scherbov, which is also used in this paper) and during the elaboration of these ideas three demographic indicators was constructed, redefined more precisely, based on prospective age: (prospective) share of the elderly, (prospective) median age and (prospective) old age dependency ratio. With respect to the remaining years of life in the calculation of demographic aging, world’s population will be in rejuvenation process by 2035, longer and more intense than defined by proportion of the elderly. Prospective approach found that longer life expectancy in developing countries is not only a result of the decrease in infant and child mortality, but also the decrease of the old population mortality. Data used in this paper are from period life tables and censuses, for period 1953–2010. Prospective age threshold in Serbia was always higher than retrospective age (60,17 in 1953 .and 63,15 in 2010. for total population) , or the proportion of people with a life expectancy less than 15 years has consistently been higher than the share of people older than 65 years (17.86% vs. 16.92% in 2010). According to prospective criteria, differences between men and women almost do not existent, so that it calls into question the widely accepted feminization of the elderly. The same conclusion stands when we discuss (prospective) median age, population is older using prospective (47,15 years) than traditional (41.41) indicator in 2010, also, compared with rest of the region or with more developed countries, prospective median age is higher in Serbia. Also, prospective old-age dependecy ratio is higher than convetional one during analyzed period. Prospective concept and amendments are necessary in public policy, especially pension and health care system, because in combination with traditional approaches can create more justified distribution for older and younger generations.