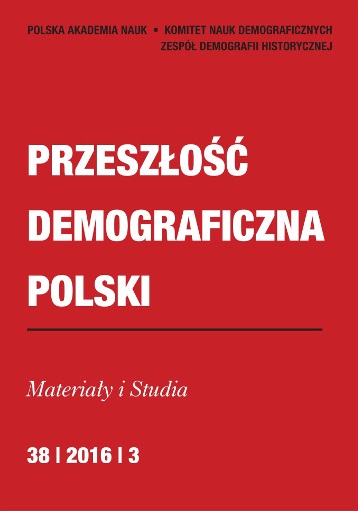 Summary/Abstract: The article initiates a publishing cycle devoted to the description of modernising processes taking place in the 19th century in the areas east of the Vistula. The publications are intended to present the state, distribution and demographic structure of the rural population composed of peasants and petty gentry of one of the parishes of northern Podlasie (Latin: Podlachia), which – after the third partition of Poland – was incorporated into the Russian Empire. The basis for detailed analyses has been the list of the inhabitants of the parish in question made in 1843 by the local parish priest. In the meantime, out of 55 parishes nearly one third was made by small or very small villages (one to five households). On the other hand, there were populous villages with over 20 households (25.5%), and every eighth parish village was even bigger, with over 30 households. Single houses were situated at the edges of the parish, far away from the centre, near Biebrza forests and marshes. In the parish population in question there were 29 gentry manors, all of them (with the exception of one) composed of one household; their size varied from 4 to 19 inhabitants. The population in question may be defined as young, progressive, with extended reproduction, where most age groups were dominated by women (with the exception of the oldest: 55–64 and 65+). The consistent underrepresentation of boys may be explained by their increased mortality in the early years because of contagious diseases, first of all cholera. In turn, underrepresentation of men was caused by compulsory enlistment into the Tsarist army, and – to a certain degree – by migration movements. Founding a family was the main aim of the members of the community, which is testified by a tiny size of definite celibacy (2–3%). The analyses in which the social structure was taken into consideration have revealed a great diversity of demographic relations, both among peasants and petty gentry. However, in the gentry there was a phenomenon of early marriages, and on the other hand most marriages were concluded in older age in comparison to their peasant neighbours. Taking into consideration the sex of the inhabitants the last period of life was still more divergent in the two groups. Old men, both peasants and the petty gentry, usually lived out their days with their wives by their side; on the other hand, 75% of women were then widows.