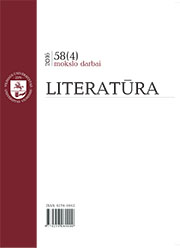 Summary/Abstract: The article discusses specific stylistic characteristics of translated literature and presents an analysis of the novel Soumission by the French author Michel Houellebecq and a translation of this novel into Lithuanian. The author of the article aims to evaluate if – and to what degree – the style and literary poetics of the novel is reflected in the translation. As soon as it was published in France in 2015, Soumission caused a lot of controversy because of the way Muslim community is represented in the novel; during the same year, a number of translations appeared, including a translation into Lithuanian. The analysis of the Lithuanian translation is founded on the insights of Lithuanian linguists Juozas Pikčilingis and Aldona Paulauskienė into the particular characteristics of literary, scientific, and administrative styles, including the problem of substantivization in the Lithuanian and French languages, as well as on the thoughts of the French researcher Henri Meshonnic on literary translation and the production of translated literature, in particular, the idea that it is vital to transfer the effect – not just the meaning – of words. The discussion of Houellebecq’s style is based on Roger Célestin’s article on the author’s language, and Juremir Machado Da Silva’s article characterising Houellebecq’s style and drawing translator’s attention to particular aspects of his language. The analysis of examples, collected from the French novel and its Lithuanian translation, leads to the conclusions that the works of Lithuanian linguists on Lithuanian stylistics, published several decades ago, appear to be still relevant today, and that translators not only sometimes fail to reflect the stylistic features of the original but also ignore the specifics of the Lithuanian genres and styles. The article concludes that the translator of Houellebecq’s Soumission fails to reproduce the author’s style: due to the excessive substantivization, which is not characteristic of Lithuanian literary style, the language of the novel takes a shift towards scientific or even administrative styles; the translation can hardly function as a work of translated literature. The author of the article states that the translation of Michel Houellebecq’s Soumission into Lithuanian is not equivalent neither in terms of style and language nor – generally – the meaning of the novel. The Lithuanian reader is deprived of the possibility to get acquainted with the real and authentic Michel Houellebecq’s Soumission.