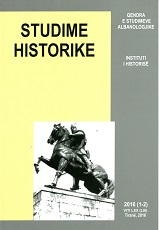 Summary/Abstract: Evidences on the presence and role of Albanians in northern European countries, especially the Netherlands and England can be traced from the fourteenth and fifteenth centuries. Especially during the fifteenth century the Albanians are documented as sailors and rowers, mostly on board of Venetian ships. In the sixteenth century the Albanian presence in Northern Europe will continue to be important, but now not as sailors and rowers, but primarily as combatants, or stratiotes. Although the stratiotes are mentioned since the beginning of the fifteenth century in Greece, their involvement in Italy begins in the late fifteenth century. It can be said that the golden century of presence and importance of stratiotes as well as the culmination of their geographical presence was in the sixteenth century. Their commitment was important not only during conflicts, but also as peacekeepers in peacetime. Despite the fact that in the sixteenth century they can be found in the farthest corners of Europe, from Italy and Spain to the distant Scotland, the gate of entry into Europe was undoubtedly through Italy, especially Venice and the Spanish possessions of Southern Italy.