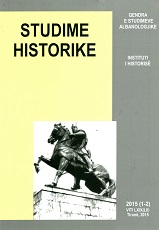 Summary/Abstract: In this article we bring evidence about the historical relationship between the Albanians and the sea. This is illustrated from their contribution to the Great Geographical Discoveries, through their active participation in the maritime history of the Mediterranean as well as of the Atlantic and of the Indian Ocean. Tracing the life at sea of four great sea admirals of Albanian origin, we bring to light their role in the maritime life of their age. In the case studies presented in this article we analyse their role in the framework of the French Monarchy and of the Ottoman State. It is not by accident that the role of the Albanians in the maritime history of the Mediterranean and beyond, increased from the very start of the 16th century. This was due to the fact that the influence of Venice in the Adriatic and the Ionian Sea decreased, bringing to an end the Venetian hegemony in these seas. The geography of the presence of Albanian seamen stretched in these two centuries from the Canary Islands in the Atlantic to the Western Mediterranean and the Red Sea, and even to the Indian Ocean and the Bay of Bengal.