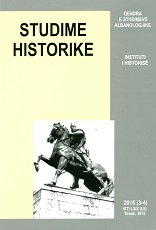 Summary/Abstract: Secession from the Ottoman Empire and the establishment of the Albanian independent state in 1912 placed institutions and their organization within a new political, legal and administrative reality, other than the one they had already operated in thus far. Although under provisional legitimacy, the government of Vlora was focused on fundamental issues of governance, in which prevailed building of centralized secular/non-religious systems, typically a characteristic feature of western governments. Such an attempt can be considered as the beginning of a long state formation and de-ottomanization process across which Albanians and their state would go through.In the external discourse of the government of Ismail Kemal Vlora the perception about ottoman Turks holds diplomatic and institutional connotations, which is a distinctive characteristic even in the earlier speech of its president. Although with somewhat dim tones, constituent part of the external discourse of the provisional government of Vlora are also the state secularization, religious pluralism, equality of religious communities before the law and state, as characteristics that would grant a European spirit to the newborn state, thus bringing it closer to the West and away from the East.In internal discourse of the provisional government of Vlora assumes the civilizing mission to the society, whose perception and way of life did not fit in the elite’s vision, namely the government, about the state and society. Although a significant part of Albanian intellectuals of that time constituted a part of the ottoman context of state reformation, they strove to separate from the past, by differentiating Albanians from ottoman Turks insofar as possible, even though their majority belonged to the same religion, namely the Muslim one. The ottoman institutional legacy, especially in the justice system, is viewed as the main barrier to channel Albania on the Western line.While the provisional government of Vlora proclaimed decisions regarding the implementation of the western model of governance and, its representative Përlindjae Shqipëniëswas trying “to make Albanians”, naturally the question arises: Was the Albanian society prepared to accept it? The Albanian society as an organic part of the ottoman one was evidently stratified, traditional, closed, authoritarian and patriarchal. The ottoman tradition and heritage already present in Albanians’ outlook could not disappear only by drafting in a flash, the legal framework. Subsequent historical and social developments in Albania will show that Albanians’ adaptation to the process of replacing or changing traditions, worshiping system, ecclesiastical organization and their relationship with their state, would prove to be a long-lasting and difficult process.