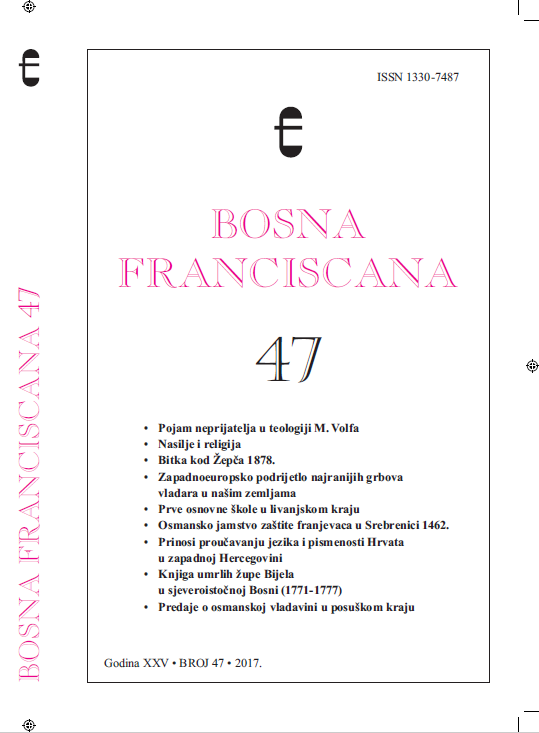 Summary/Abstract: The coats of arms of the rulers of Dalmatia with a wide hinterland to the Sava river and Slavonia are researched in the paper. These earliest coats of arms do not belong to the official heraldry. They were not created in the offices of the rulers. They were made by the authors of armorials produced between 1265 and 1425 in the European West; in Spain, England, and westward of the river Rhine. These coats of arms are the common heritage of our four countries: Dalmatia, Bosnia, Croatia and Slavonia, and they are the predecessors of the coats of arms that later were joined to some of them particularly. The names Panonia and Wintland (or Wenden according to the ethnicity) from the armorials refer to Slavonia; and Slavonia, Moerland and Moriane from the armorials and literature refer to Dalmatia in the ancient Roman meaning, while the term Dalmatia itself does not appear there. The term Bosna–Boxina in these sources can be traced back to about 1350, and the name Sclauonie for Slavonia itself from 1425. One of the explored armorials now exists only as a later copy. It was researched to determine which of our coats of arms were in the original book and which were added later. Due to the completeness of the representation the paper was supplemented with a part of the armorial that does not appertain to the considered period. The work is also complemented with the coats of arms mentioned in the work of F. Rački. The sources he cited can not be identified today, but some of them could be older than 1425.