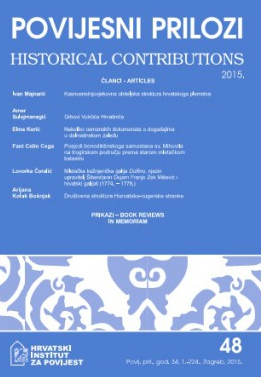 Summary/Abstract: The article offers an analysis of the heraldic legacy of several members of the Vukčić Hrvatinić family (Hrvoje, Katarina, and Juraj Vojsalić), attested in sources of sphragistic, numismatic, and heraldic nature, as well as in stone and metal reliefs. The author has taken into account the heraldic images in coins issued by Hrvoje as a Herzog of Split, in his Glagolitic missal, a relief on the wall of his catacombs in Jajce, and in the so-called Illyrian Book of Heraldry, which has been considered as a secondary source. As for the relief on the wall of his catacombs in Jajce, the author has offered a fresh insight, opting for the heraldic representation of mourning in accordance with the funerary-sepulchral function of the given space. Regarding the fact that the present historiographic, heraldic, and numismatic scholarship has used rather erroneous terminology for Hrvoje’s two coats-of-arms, the author has here proposed new and more adequate terms. Earlier hypotheses on the origin of Hrvoje’s heraldry and its models in the light of their bearer’s vassal status and his change of seniors (first Ladislaus of Naples and then Sigismund of Luxemburg) have been confirmed, and the origin of crosses on one of his coats of-arms clarified. The author has also established an evolutionary chronology of Hrvoje’s heraldry. Since the first coat-of-arms (with figures on the shield and in ornamentation) used by Hrvoje appears in many variants, the author has analysed their development and established an order of emergence, followed by an analysis of the substitution of this coat-of-arms through a second one, taking into account the monetary reasons for this heraldic reform. As for the evolution of Hrvoje’s heraldry, the author has concluded that, before introducing the first coat-of-arms ith the figures of his first senior, the duke must have had his own, personal proto-heraldry, which has so far been documented only fragmentarily, and defined its elements (figures). Thereby the only available data on the heraldry of other members of the Vukčić Hrvatinić family offered by the contemporary primary sources has taken into consideration: reliquaries commissioned by Katarina and the seal of Juraj Vojsalić, used by Hrvoje’s children Vuk and Vojislav.