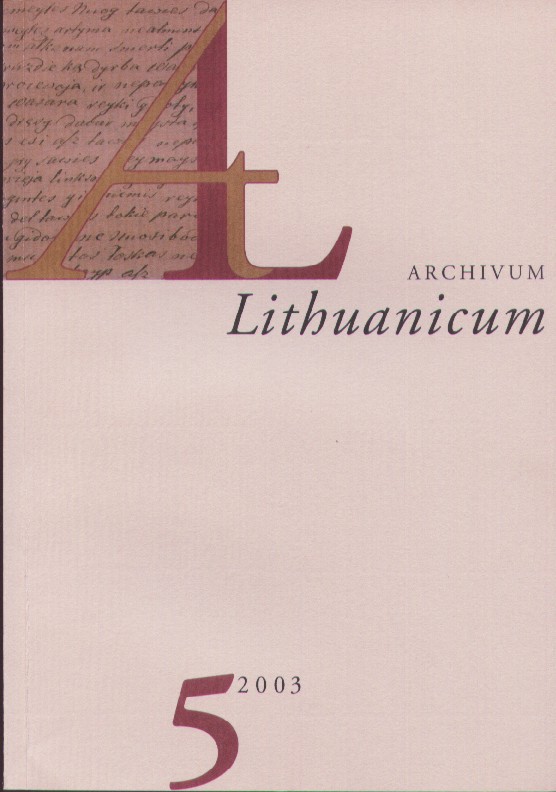 XVIII - XIX amþiaus lietuvišku tekstu grafemos <I>, <J>
The graphemes <I>, <J> in Lithuanian texts of the eighteen and nineteenth centuries

Summary/Abstract: Around the third and fourth decades of the eighteenth century printers evidently believed that capital (upper case) letters <I> and <J> were to be differentiated like their lower case equivalents <i> and <j> (cf. Jurgis Kasakauskis' Razanczius, 1727; Jonas Jaknavièius' Ewangelie, before 1727, 1731, 1738, 1743). On the other hand such a rule was not applied consistently at that time, and all the texts still possessed deviations from the rules (whether because of absence of italic <J>, as in Kasakauskis' Razanczius, or because of the strong influence of an older model, as in Jaknavièius' Ewangelie). Nevertheless the new (fashionable) letter <J> sometimes managed to push the grapheme <I> aside. Thus there is no functional distinction between <I> and <J> in the anonymous grammar called Universitas (1737). Moreover, in the second half of the text the typesetter switched to using only the letter <J>. 1.2. Approximately in the middle of the eighteenth century (in 1750 and later) the Vilnius' University (Academy) printing house finally established the precise orthography of the letters <I> and <J> that matched respectively the sounds [i] and [j] (in Lithuanian the sound [i] is a vowel and the sound [j] is a sonorant consonant that can occur only before a vowel and is always pronounced like English [y] in yes); cf. Jonas Jaknavièius' Ewangelie (1750, 1756, 1758), Vincenzo Caraffa's Pedelis Miros (1750), Mykolas Olðevskis' Broma (1753).