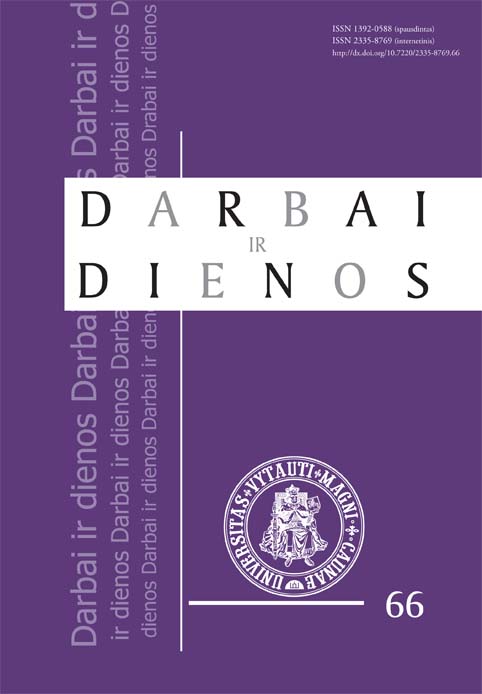 Summary/Abstract: Simonas Daukantas’s manuscript “History of the Lithuanian Lowlands” (Istoryje Ƶemaytyszka, 1828–1834, preserved at the Library of the Institute of Lithuanian Literature and Folklore in Vilnius) is an unprecedented record of Lithuanian history of over 1100 pages in folio. It was written in Rīga during a time when Lithuania constituted a fragment of the Russian Empire. Daukantas was the first author to write Lithuanian history in Lithuanian. His manuscript was compiled a long time before the standard Lithuanian orthography was forged, so variation is present. Daukantas’s variations, however, are extraordinary even within the frame of his time. He used seven main digraphs to mark his Lowland dialectal diphthong [ẹi] (the equivalent of [ie] in modern standard Lithuanian): <ei, ęi, ie, iei, iey, ij, yi>. The orthography of certain words is quite consistent throughout the entire text (<ei> in the words deina ‘day’, Deiwa ‘of God’). Many others, however, were frequently modified or used interchangeably in the process of compilation. The use of <yi> intensified at approximately the midpoint of the manuscript (lyipę ‘[he] ordered’, szyina ‘of hay’), but then in the last quarter it was replaced by <ij> (lijpę, szijnu). Along with these changes, other variants were interjected (leipę, szeina). It was common to use three variants in a single segment of the text (e.g., żeima, żęima, zyima ‘a winter’). Words with the roots starting in <k>, however, followed an entirely separate pattern; in the second half of the manuscript Daukantas stabilized their spelling as <kiey> (kieykweiname ‘in everyone’, kieyste ‘to change’). In a way, Daukantas was open to various cultural influences, though he never followed other orthographic features uncritically. He used the traditional <yi>, which was popular in the previous century, introduced an innovation <ij> due to changes in fashionable Polish orthography, and coined <ęi> on the basis of a meaning transformation of the East Prussian Lithuanian letter <ę>. Certain patterns emerge that cannot be explained by a difference in phonetics, but only by a harmony of letter forms. For instance, in the second half of his manuscript Daukantas obviously matched the letters endowed in extenders <l, p, t> to the equivalents with the descenders in digraphs <yi, ij> (lyipas ‘linden trees’ and Lijpas; pyitus ‘South’ and pijtine; tyik ‘this much’ and tijk). At the same time, he also partly avoided using the digraphs <yi, ij> with the extenders after two consonants at the root-initial position (pagreiiusis ‘those that captured’, kwęiste ‘to invite’, pleina ‘of steel’, snęiga ‘of snow’). Ample variation can be explained by the competing variety of influences and by a conscious or subconscious attempt to seek harmony among the shapes of letters. Daukantas broke his earlier orthographic habits to introduce the changes, but did not uniformly adopt new ones. He might have rather liked his assorted ways of expression and ornamentation in spelling. Analysis of his orthographic patterns allows us to connect particular segments of the manuscript to events in Daukantas’s life. For instance, it is very likely that Daukantas was persuaded to apply certain orthographic changes by his friend Count Jurgis Plateris, who visited Rīga in the first half of 1833. The last quarter of Daukantas’s manuscript contains dramatic orthographic modifications that correspond to Plateris’s orthography in quite a few significant details.