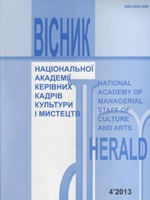 Summary/Abstract: The purpose of the research is the study of memes as objects of Internet creativity, according to the genre typology related to post-folklore and post-folklore type of communication in the Internet. The methodology consists in the application of analytical, semiotic and culturological methods of study of visual -graphic and verbal types of Internet memes, which, thanks to the content-communicative characteristics, are capable of forming other kinds of post-folklore texts. The scientific novelty of the research is that for the first time Internet-memes have been studied as a genre variety of post-folklore and a means of post-folklore communication on the Internet; The segment of memes of the Ukrainian Internet space and the sources of their formation are analyzed. Conclusions. As a result of the research it was established that meme as a phenomenon of post-folklore Internet creativity is both verbal, graphical-visual and creolized text, has genre and structure-forming potential in constructing other semiotic complicated post-folklore texts. Internet-memes originate mainly in the environment of social networks and communities, however, gradually spreading by other channels of communication. The popularity and spread of the meme is influenced by its ability to be used in many senses and various communicative situations. According to their semantic content, memes refer to precedent phenomena, which in a condensed form contain information about actual events and phenomena of social reality, forming the appropriate context. In the process of communication, recognizing and "reading" these connotations of the meme provide the expected result of reaching the main idea of the text, which, in turn, can serve as a source for further creativity. Memes become sources of post-folklore creativity on the Internet, and the post-folklore texts themselves are means of intercultural communication, with the help of which a definite opinion is expressed, and its own reference within the communicative environment is confirmed.