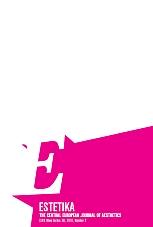 Summary/Abstract: Carl Heinrich Seibt (1735–1806) was the founder of modern Bohemian aesthetics, that is, thinking about taste, beauty, and fine art, which he developed in a living language. Yet little is known about the content of his lectures on the Schöne Wissenschaften or his views on aesthetics. The following article aims to fill this gap in four respects. It explains why the topic has so far been neglected; it gives a summary of the now known sources from which we may draw our knowledge of the topics of art theory, the individual kinds of art, and general aesthetics, with which Seibt was concerned in his lectures. It presents the standpoints which he held in them, and it puts them into the European context of the period, particularly German aesthetics. It aims primarily to determine whether the accessible sources contain traces of influences other than those of his teachers at Leipzig, who are mentioned in the secondary literature: Johann Christoph Gottsched (1700–1766) and Christian Fürchtegott Gellert (1715–1769), including the important authorities recognized by them, in particular Charles Batteux (1713–1780). The article shows that Seibt’s views were also influenced by Moses Mendelssohn and Johann Joachim Winckelmann, representatives of a generation of German aestheticians younger than his teachers.