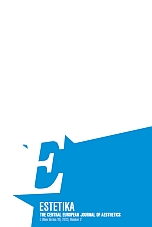 Summary/Abstract: This article presents a summary of the main views in Dambeck’s lectures on aesthetics on the basis of all known sources and compares the views thus obtained with views developed in German aesthetics in the late eighteenth and the early nineteenth century, with the aim of finding their chief source and reintegrating them both into German aesthetics and, more narrowly, into the aesthetics taught at Prague University. Johann Heinrich Dambeck constructed his lecture series on the plan of Zschokke’s textbook Ideen zur psychologischen Aesthetik (1793) which has never been taken into account in any other research on his lectures. The close link between Dambeck’s lectures and this textbook compels us to revise the current understanding of the nature of their ideas. Dambeck has so far been most often unproblematically presented as an adherent and disseminator of Kant’s and Schiller’s ideas about aesthetics in the Bohemian Lands. The key textbook on which he bases his university lecture series is, however, intentionally un-Kantian. Zschokke’s Ideen is part of the psychological-anthropological stream of Late-Enlightenment German aesthetics.