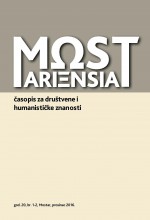 Summary/Abstract: Feminism has substantially changed the position of women if we compare it to the status they had in the society before the emergence of the feminist ideology. Feminism has tried to keep the character of emancipation in the three phases it had. In the very first phase women succeeded in entering the public space and fighting for equality with men. But the fact that they got legal equality did not mean that they formally had equality in the real world. It was very difficult to change old social norms and socially constructed gender roles of women. Therefore the second feminist phase has started. Under the influence of deconstruction and postmodernism feminism in the third phase became intertwined with the gender ideology. That brought it further from its primary aim – fight against dominance and for equal access to the public space. Emphasized sexualizing of women in the media shows that the society has not evolved a lot. It is still underestimating and belittling them. The aggressive aspect of such contents states that feminism is a process of constant fight and not a concrete victory.