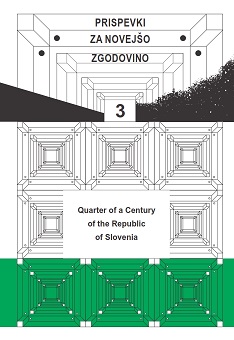 Summary/Abstract: Following the successful defense of the country in June and July 1991, the Republic of Slovenia developed its partly unestablished defense system in the light of the instability of the country’s southern neighborhood that continued to be ravaged by war for the next five years. As an independent country, Slovenia developed its system of national defense in the context of armed neutrality, but with a desire to join NATO and thus transition to a system of collective defense. The Territorial Defense was developed into a regular army and renamed as the Slovenian Armed Forces in 1994. In the circumstances dictated both by restrictions imposed by the UN (arms embargo) as well as the country’s own capacities and available material resources, Slovenia developed a single-type army based on national service and initial large numbers that were gradually reduced. In 1993, the country decided to pursue collective defense as a strategic goal and initiated efforts to join NATO. As Slovenia moved closer to NATO and as the security of its immediate environment changed, numerous reforms of the Army and of the defense sector loomed. During Slovenia's preparations to join NATO from 2000 to 2004, the country abandoned its national service system in 2003 and reformed the Slovenian Armed Forces into a professional army numbering about 7600 professional soldiers, NCOs and officers, as well as an additional limited voluntary reserve force.