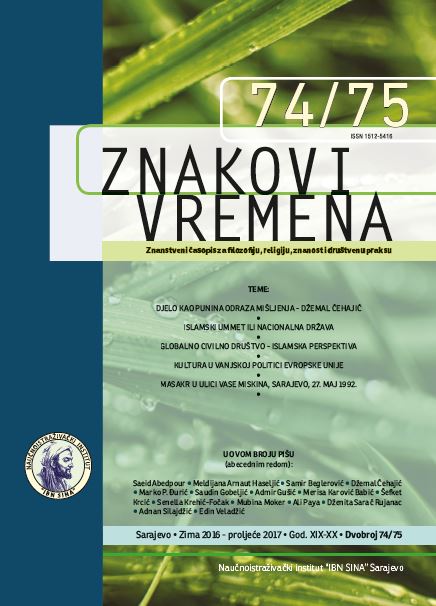 Summary/Abstract: This article will discuss the massacre in the bread queue in Vaso Miskin Street, as one of many examples of the shelling and the mass killing of civilians in the city under siege. After introductory explanations about gradually putting the city under siege by the JNA / VJ / SRK (Yugoslav People’s Army / Yugoslav Army / Sarajevo-Romanija Corps), follows a detailed description of the crime, as well as military and political context in which it was committed. Also, special attention will be paid to the reactions of the military and political leadership of the RS, FRY, RBH, UNPROFOR, as well as the interpretation of certain media about this crime. In addition to the Pale, Banja Luka and Belgrade media, we focused in particular on the analysis of a newspaper article in the London newspaper The Independent, in which the massacre in Vaso Miskin Street was mentioned in the context of “selfshelling” own people by “government forces”! Were the decisions of the Security Council of the UN to send additional troops to Bosnia and Herzegovina or intensifying talk of a possible military intervention, some of the reasons for writing this newspaper article that had a clear objective to encourage the British public opinion to believe these assertions? Was the publication of newspaper articles about “selfshelling” own people, a kind of encouragement to continue the shelling of Sarajevo? In order to respond to these extremely important issues, besides the inevitable analysis of the records of investigation by Security Services Center of RBH Ministry of Internal Affairs, performed on the spot immediately after the crime, as well as witness statements, statements of the injured in the massacre and the families of the victims, we will dealin particular with the analysis of “investigations” by the United Nations, the daily reports of UNPROFOR, as well as with the correspondence of their commanders with military and political leaders of RS / FRY after the crime. Also, for the interpretation of political and military context, aswell as the reaction that followed the crime, in addition to literature that treats these questions, we will rely on the analysis of the transcripts of intercepted telephone conversations between the military and political officials of Republika Srpska / Federal Republic of Yugoslavia, and the available documentation of the “Army of Republika Srpska” and the Army of the Republic of BiH. Through analysis of these documents, along with the chronology of the next stages of the siege, we conclude that the same pattern was used during the entire period of the siege, especially when it comes to manipulation after the mass killings of a number of civilians. Light sanctions imposed against the Federal Republic of Yugoslavia (FRY) by a resolution of the Security Council of the UN that followed immediately after the massacre, at the moment when most of the territory of the Republic of BiH is occupied, and when almost all the military machinery of the Yougoslav People’s Army / Yougoslav Army was made available to the newly formed “Army of Republika Srpska”, proved to be more than an inefficient move by the UN Security Council in an attempt to halt the aggression against RBiH and fierce shelling of its capital, and also served as a way to prevent possible military intervention. Thus, the phrase “the perpetrator has not been identified” served as a perfect alibi for nonintervention and was a kind of encouragement to continue shelling the city. Together with the chronological sequence of events, reactions after the crime, as well as the consequences, the article will consider the attitude of international and national courts towards this crime, and the prosecution or nonprosecution of those responsible for this massacre.