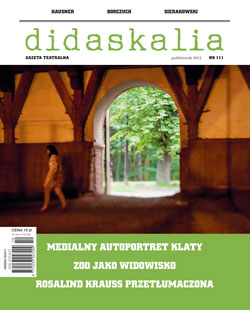 Summary/Abstract: Łucja Iwanczewska ponders the phenomenon of the power of the visibility and physicality of Marilyn Monroe, which is constantly explored in many fields. She attempts to say whence the power of this image derives. Surveying the actress’s way of being in life and in art from the perspective of Pierre Legendre’s and Jacques Lacan’s philosophies, she proves that her staged behavior arose from her lack of a Father Figure, and from seeking to eliminate the alienation of her own body and image, creating a subjective constitution of herself. In the author’s opinion, Krystian Lupa successfully showed this process in his play Persona: Marilyn.