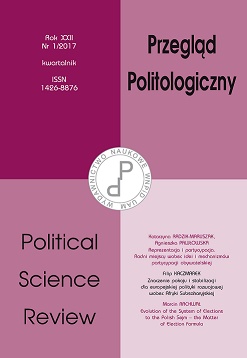 Summary/Abstract: This paper investigates political parties’ attitudes towards the past. It explores the ideological inspirations and patterns of behavior of the parties founded in Poland after 1989, which were more or less consciously ‘borrowed’ from the political groups operating in the interwar and Communist period respectively. The parties have been found to draw both upon democratic and authoritarian traditions. In addition to examining the ideological declarations and public utterances made by politicians, and proposals for systemic solutions, the paper also looks at political practice in the broad sense. The aim of this work is to determine how political traditions could help to shape the political identities of contemporary parties and to identify the historical references favored by political groups in post-1989 Poland. It portrays the political parties’ stances on tradition and shows how they are used in political rivalry.