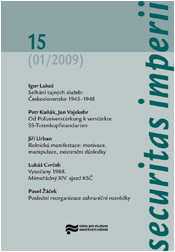 Summary/Abstract: After officers from the American intelligence service arrived in Czechoslovakia in May 1945, it seemed as though fortune had smiled on this outpost of Western democracy. They were educated men full of resolve who understood Czechoslovakia, spoke the language of its citizens and knew its history. They had time to prepare for a clash with the Soviet adversary, which they could expect, and they enjoyed the unconditional support of their country’s ambassador Laurence Steinhardt. Another thing that also played an important role was the fact that around half of the Czech political and military elite as well as a large percentage of those working in the security apparatus were favourably disposed towards the American intelligence officers who requested information from them. The Americans whose task it was to gather confidential political, military and commercial data in Prague had access to some of the highest-ranking officials at the offices of the president and the government, the Ministry of Foreign Affairs, the Ministry of Defence and the Ministry of the Interior. Passing on information to American intelligence officers was not viewed as treason and a person did not lose his honour by doing so. It was a service to democracy. It is hard to imagine another country where the interests of American intelligence officers coincided to such an extent with the interests of their sources. In the light of these circumstances, the rapid defeat of democracy and the subsequent triumph of totalitarianism in February 1948 is all the more humiliating. In regard to her stay in Prague, Louise Schaffner declared that the post-War American intelligence service severely lacked training for the given region. („I am convinced that, if the British had been looking after the Nechanský case, everything would have turned out better.“). Naturally, the British intelligence service would have used methods that they had perfected over the course of many years operating in various political environments. They would also have simply conducted themselves well as spies. Nevertheless, the British had already operated in other countries of post-War Eastern Europe such as the Baltic Republics, Poland and Albania, and their missions had equally disastrous results. Consequently, it is not possible to conclude that workers from the American intelligence service did not fulfil their duties with enough effort and professionalism, which would have been required of them in the struggle against the adversary they faced in Prague in the years 1945–1948. The West first had to fully realise the hidden dangers that were inherent in the Cold War before deciding to adopt the Soviet model of intelligence work. The irony of the matter is that, when the Americans finally mastered this in Communist Bloc countries in the 1980s, hostilities had already abated and traitors in the ranks of the CIA and the FBI meant that nobody could savour this victory .