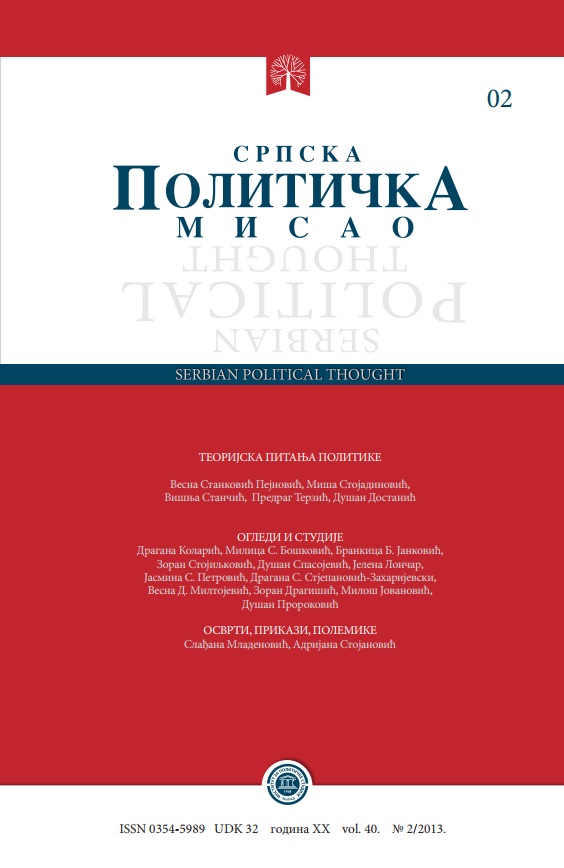 Summary/Abstract: Nietzsche’s philosophy of politics and power is acquainted with Machiavellian principles in the distinction between the ruler type and ruled type, elite and masses, master and slave, discourse on the necessity of social ranking and subordination, subordination of morality to politics, the emphasis on power in political analysis, need for regional spaces with the foundation of the state in imperialism and violence. Machiavelli and Nietzsche political philosophy are based on a conception that life or nature is immoral and life is the will to power. Politics as one important sphere of life, has aimed at expansion of power, at growth, at superiority and operate in its basic functions throughout injury, assault, exploitation, destruction. Napoleon, as a late representative of the Renaissance, is for Nietzsche higher man because he embodied power and spiritual strength. Napoleon is a political actor as the artist and another possible realm of creativity. As the artist he is using the public arena as the medium on which practices his art for selfovercoming and spiritual growth, but also a space which ruin him because in the end he did not succeed to cross over the dangers of the political realm. Human greatness offers a way out of the closed circle of Christian morality and a new path for human evaluation. In the case of Napoleon, Nietzsche’s conception of higher man and some sort of hero is not only abstract ideal. Higher man’ s soul is a chapter of richness of artist, philosopher and tyrant. His failure deprives us of something extraordinary, but his mixed characters are always accompanied by danger and failure which are only steps away of success. He is frightening because he can bring pain and he is terrible because of his dedication to his own project of selfovercoming. Nietzsche is showing how suffering and hope go together in higher man creation. Nietzsche offers a different perspective than traditional political philosophy because almost all political thought is goal oriented in using politics as achievement. Nietzsche’s intention was to challenging the way about politics because the value of political action is not determined by the action, only by the deeds. The power is the basis of all rights, not a social contract affirming the rule of the person over law. By examining politics through an existential philosophy of life, Machiavelli goes to the core of politics. Cesare is expert deceivers, skilled in use weapons and words who desires power for himself and this desire is in the heart of man of politics. He is kind of heroes who suffers in the name of others. The hero’s agonistic experience can be reduced to 3 principles: independence, acquisition, appearance which are closely connected with virtue exercised on directed his power toward crowed or making one’s own laws. He is a hero because of the implication of his action beyond morality and because he knows how to eliminate enemies by skillfull dissembler. For achieving political power he will do anything necessary, because politics is a realm onto it. Because all humans are in a perpetual act of exercising power in order to achieve their particular purposes, successful political man is the highest form of human achievement because he is able to bring order in a world of discord and chaos. In the cases of Cesare Borgia and Napoleon it can be seen that is possible for higher person or ruler to show their immoral power without barriers in the realm of politics and if they have enough strength state is essentially an instrument of power, because the will to power is the philosophy of politics.