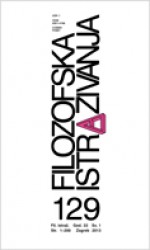 Nietzsche i liberalizam
Nietzsche and Liberalism

Summary/Abstract: Although liberalism and Nietzsche have person in their understanding of the world, there are different points of view. Contrary to liberalism, which connects the idea of human progress with the constant evolution of society, Nietzsche is pointing out that every existence and every process are struggle. Only through struggle is possible to create individuality, uniqueness, and freedom. In opposition to liberalism, Nietzsche thinks that every person, every human being must incline to overcome self. Liberal faith in progress emphasizes the priority of rights grounded in the concepts of individuals as rational being, individual freedom as condition of progress, and tendency toward harmonic order, while Nietzsche sees instincts and activities as preconditions of self-understanding. Ideology of equality, according to Nietzsche, is morality of the herd. For Nietzsche, the belief in free will represents the original mistake because we must aspire to become what we already are: new, unique self-creators who impose laws to themselves – every person creates his/her own virtue, own categorical imperative. For liberalism, freedom is the possibility of acting in accordance with the moral law, while for Nietzsche it represents the acting itself. Liberalism sees the individual as an autonomy person who acts alongside with the universal laws of the reason, according to universal laws of reason. On the other side, Nietzsche arguments for the autonomous person who lives according his/her own rights. Nietzsche claims that not a single living organism is an individual, but the unity of power, forces, mixture of Dionysian and Apollonian which lacks the unique nature.