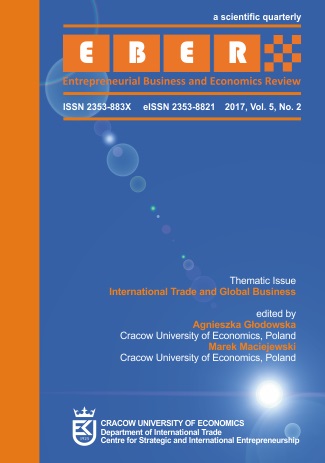 Summary/Abstract: Objective: The main aim of this article is to present how the heterogeneity of workers, firms, and tasks can be incorporated into empirical international trade analysis. In particular, we provide an empirical example in which we aim to quantify the reliance on foreign value added (FVA) within Global Value Chains (GVC) on wages. Research Design & Methods: We estimate a Mincerian wage model augmented with a measure of foreign value added drawn from international input-output data. We employ econometric modeling with instrumental variable (addressing the endogeneity between trade and wages) and estimated through weighted regression with cluster-robust standard errors. Findings: Controlling for individual workers and job characteristics, we find the negative correlation between FVA and wages. The effect is conditional on the skill and task typology (affecting mostly workers performing routine tasks). Implications & Recommendations: In empirical international trade analysis it is necessary to capture many dimensions of complexity observed in the real world. We argue that country- level or industry-level analysis on the international trade-wage nexus is not sufficient. Contribution & Value Added: The originality of this work lies in studying wage-international trade interactions in a multicounty setting (which allows for some generality in the conclusions drawn), with the use of microdata which allows us to account for several aspects of heterogeneity. We contribute by providing an example of international trade-labour markets analysis which captures many dimensions of complexity observed in the real world: differences between workers, tasks they perform and firms in which they are employed.