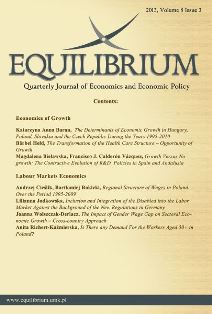 Summary/Abstract: We propose an empirical analysis of testing the relationship between gender wage gap and economic growth. The study takes into account 12 manufacturing sectors in 18 OECD countries for the period between 1970 and 2005.We use industrial statistics (EU KLEMS, 2008) on female and male wages that distinguish between wages paid to different groups of workers classified according to skill level: high, medium and low. We estimate augmented production function where the male-female wage differentials constitute a potential channel influencing growth (positively or negatively). Our research is motivated by the ambiguous results of previous empirical studies (e.g.: Seguiono, 2000; Busse and Spielmann, 2006; Seguino, 2011; Schober and Winter-Ebmer, 2011). Our main findings indicate that gender wage gap for high, medium and low-skilled workers is negatively correlated with sectoral growth. This results are confirmed in a number of robustness checks.