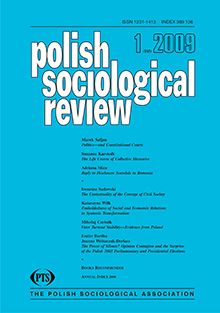 Summary/Abstract: This paper investigates opinion contagion in collective behaviour using threshold model (Granovetter (1978)). The theoretical background is the spiral of silence concept developed by Noelle-Neumann (1974), arguing that people only assert their opinions if they perceive a minimal support from a relevant proportion of others. We apply the model to explain the dispersion between pre-elections preferences and the final results of the Polish parliamentary and presidential elections in 2005. It is shown that the minority opinions were more widely-held than was declared in opinion polls as a consequence of different distributions of the threshold values of opinion assertion.