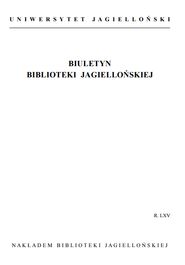 Summary/Abstract: Among other things, the present article attempts to find a link between John Wycliffe’s so-called philosophical ultra-realism and his mostly heterodox, but also sometimes rather conservative theological and social opinions. It also attempts to interpret a Polish poem by Andrzej Gałka entitled Pieśń o Wiklefie [The Song of Wycliffe] in the context of Wycliffe’s philosophy, focusing on its more abstract aspects as well as on its practical consequences as regards politics and our attitude to the Church hierarchy. The author is particularly interested in the manner in which Gałka uses Wycliffe’s philosophy as the basis for a demand for a radical reform of the Catholic Church in the spirit of Hussitism and also for an equally radical critique of the papacy, founded on an analysis of its legendary origins.